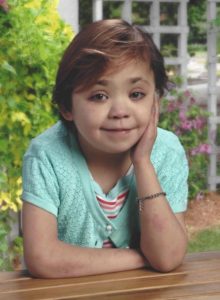 Daena was born in August of 2001. What follows are the events leading to her birth and beyond?

We were expecting our second child. Being 35 years old and pregnant brought extra excitement and with it extra rounds of prenatal tests. Once we hit our 20th week, we completed a ‘multiple marker screening test’ and low-level ultrasound. During our ultrasound exam, our doctor suggested that we have a fetal-echo cardiogram. It was during this test, at 22 weeks of pregnancy, that we, were given the news our unborn baby had Hypoplastic Left Heart Syndrome (HLHS). Like others, we were given the options of terminating the pregnancy, compassionate care, or lastly the 3-staged surgery and/or a heart transplant. The day was scary, confusing, full of tears and surreal. The first two options were out of the question, so the search for more information began. We met with heart surgeons from hospitals in Connecticut and then to Boston Massachusetts.

Our Obstetrics doctor was very helpful over the next few weeks and helped us make arrangements in Boston for specialized prenatal care. After complications found during last office visit, we were immediately scheduled for a cesarean birth. Our daughter Daena was born at Brigham and Women’s Hospital, and transfered directly to Boston Children’s Hospital. After four days of being monitored in the cardiac ICU she underwent her first of three open heart surgeries, the Norwood Procedure. Nine weeks later, the misfortune and horror of September 11th, a surgically placed feeding tube and many sleepless nights we finally left the hospital and went home.

With Daena’s first procedure being a success we began our journey to surgery number two, the bi-directional Glenn. Daena needed this procedure at approximately nine-months of age. Surgery three, the Fontan, was completed at age 2.

Daena has endured many other non-heart related issues and surgeries. She was diagnosed with Kabuki Syndrome, at age 4 and shares most traits of the syndrome.

Beginning in 2006 Daena developed Ascites. The Ascites led to hyperkalemia, A-fib, a liver biopsy, and a confirmation of cirrhosis, caused by the pressure in her heart due in part to the Glenn procedure. In early 2007, daena receieved a pacemaker. Now at age 7, Daena is a beautiful, thoughtful child who brings happiness to everyone she meets! At a height of 37” and 34 lbs she has touched many lives and has excitedly accepted the invitation of being an honorary C.H.O.G member!

We pray for her and thank God often for Darien, Daena’s heart healthy sister, for Daena, and for everyone that continues to help our family and be in our lives, they are truly special to us. We love you.

This Story and many others from families with a child born with a congenital heart defect can be found at www.littlehearts.org/stories